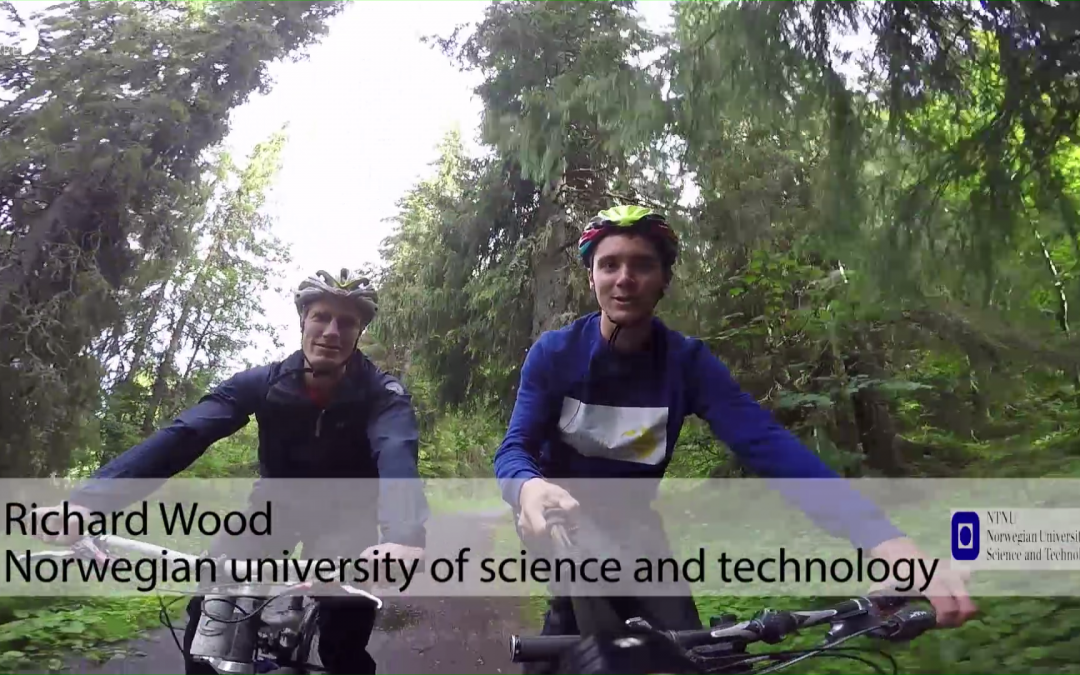 Richard Wood, research scientist and Professor in one of the prestigious Norwegian universities, we talk about our environmental footprint, how we calculate it easily thanks to the tool they created http://www.environmentalfootprints.org/ and of course how decrease it!

Feel free to take a tour on their website which is very well done, you learn a lot just like us!

It is with this calculation he announced that since August 13 humanity has used all the resources that the earth can produce in 1 year and draws on its reserves. 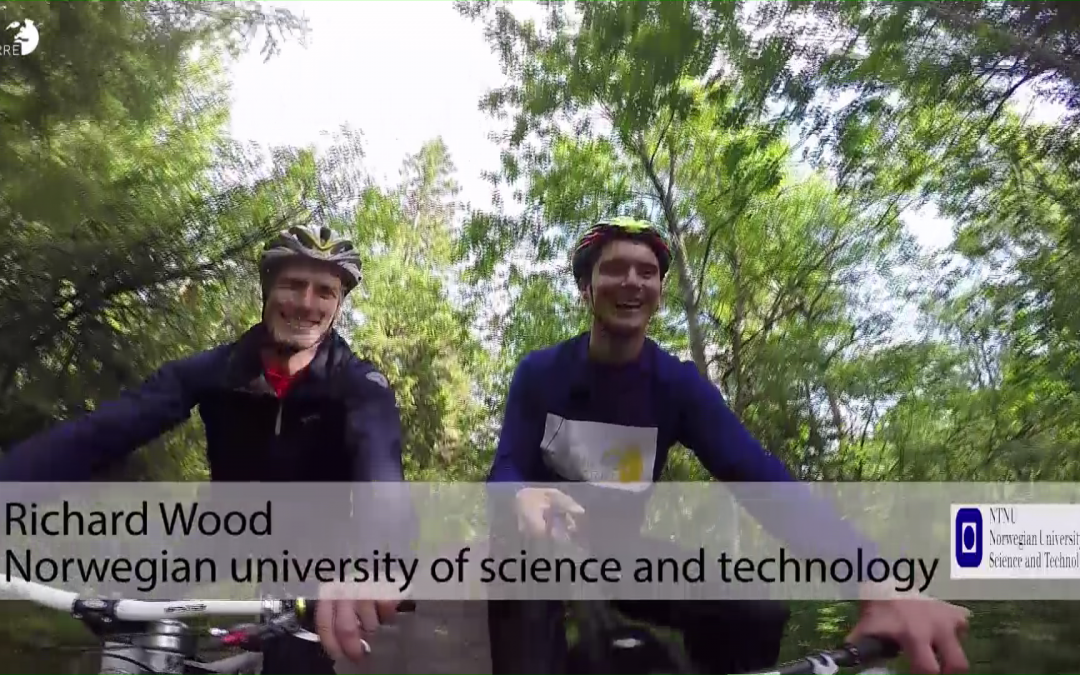 Richard Wood, research scientist and Professor in one of the prestigious Norwegian universities, tells us this time in its areas of research on trade, environment and globalization. How this will impact of greenhouse gas emissions. 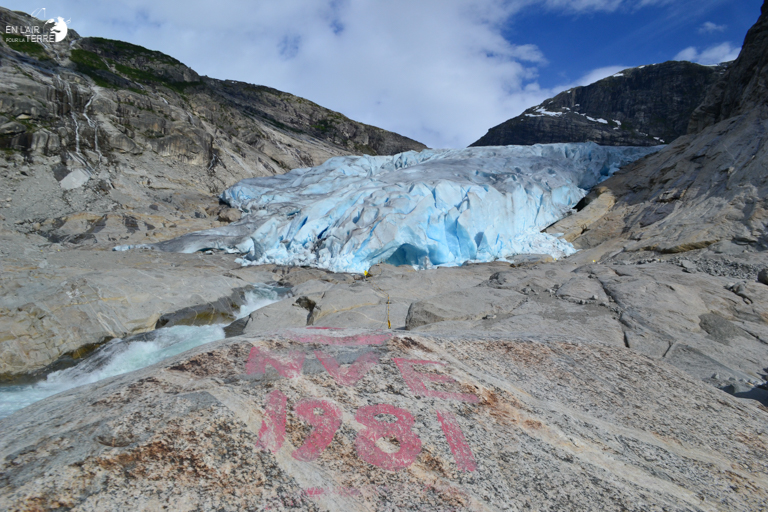 Jean Jouzel, the scientific sponsor of in the Air to the Earth, costs, french Glaciologist, climatologist and vice president of the scientific group of the IPCC from 2002 to 2015 we explains comprehensively where we are compared to the climate change then presents the IPCC in a second interview!

Presentation of the IPCC

Today, he has more doubt on the fact that man is responsible for the climate change that we are currently living. Evidenced by the IPCC which we hear so much about, and on which you will find details below.

As a reminder, the IPCC does mean Intergovernmental Panel on climate change. It was established in 1988 by two United Nations agencies:

The IPCC was created as a result of different works devoted to the impact of human activity on climate change. For a long time, it was indeed thought that the influence of gender on the climate was negligible compared to natural phenomena, such as solar activity or other. Unfortunately this is not the case and it will be the end of the 1980s so that the idea of a climate change related to human activity is taken seriously and that the IPCC is created.

The mission of the IPCC is to gather, assess and synthesize the scientific information available in the world. Expertise put at the service of the world but political and economic decision-makers. Because the companies, who are being asked to reduce their greenhouse gas emissions, are obviously concerned. The IPCC experts do not themselves new research: they “peel” the existing scientific literature to draw the ‘extract every important detail. The assessment reports also strive to reflect the scientific debate. The 2001 edition, for example, reflects the apparent inconsistency between observations of surface temperatures, indicating a warming, and satellite observations which, on the contrary, emphasize a cooling trend (an error in the processing of satellite data will be highlighted later).

One of the features of the IPCC is the preparation of its reports: they are written in a process with the intensive phase lasts about two years. At each step, the texts are subject to outside (scientific community, governmental experts). In 2013, we have thus received 54 517 comments on the work of Group 1. Authors should take into account all of these comments and, if not, to explain. Even subject to the approval of the Governments, the report is no exception to the scientists. This process gives the IPCC report its visibility and allows policymakers to appropriate it. Despite its complexity, I think the virtue and the strength of the collective expertise.

We would like to tell you about the IPCC, because this is not only a dozen people who are trying to understand what climate change is in their corner. The IPCC summarizes all of the scientific work, which have been published and verified by the scientific community (i.e. thousands of people).

You will find here the latest report of the IPCC (the 5th) which dates from late 2014 and the french summary report which is available there. If you do not want to read 40 pages look only at the following charts which are sufficient to measure the magnitude of the problem facing our society. On the other hand if you speak English and you like to read then the synthesis report with only 32 pages is very well done to give you an overview.

To learn more about the work of scientists who have revealed that climate change, go see ‘The ice and the sky’ movie on the life of Claude Glorius, who is beautiful.

We will now present you various graphs that show the magnitude of the current problem and which you can find in previous reports.

First we present the four scenarios used for communicating on climate change:

GHG means gas greenhouse. We spoke in eq – CO2 that is Equivalent of CO2 because there are also other gases to greenhouse effect than CO2 as Methane (CH4), nitrous oxide (N2O), ozone (O3) or even the water vapor (H2O). It takes so all of these gases are back to CO2 using global warming potential (GWP). Is thus an aggregate measure of the greenhouse gas to facilitate comparisons between the different scenarios.

The RCP are associated with more or less significant CO2 emissions and therefore to a future global temperature: 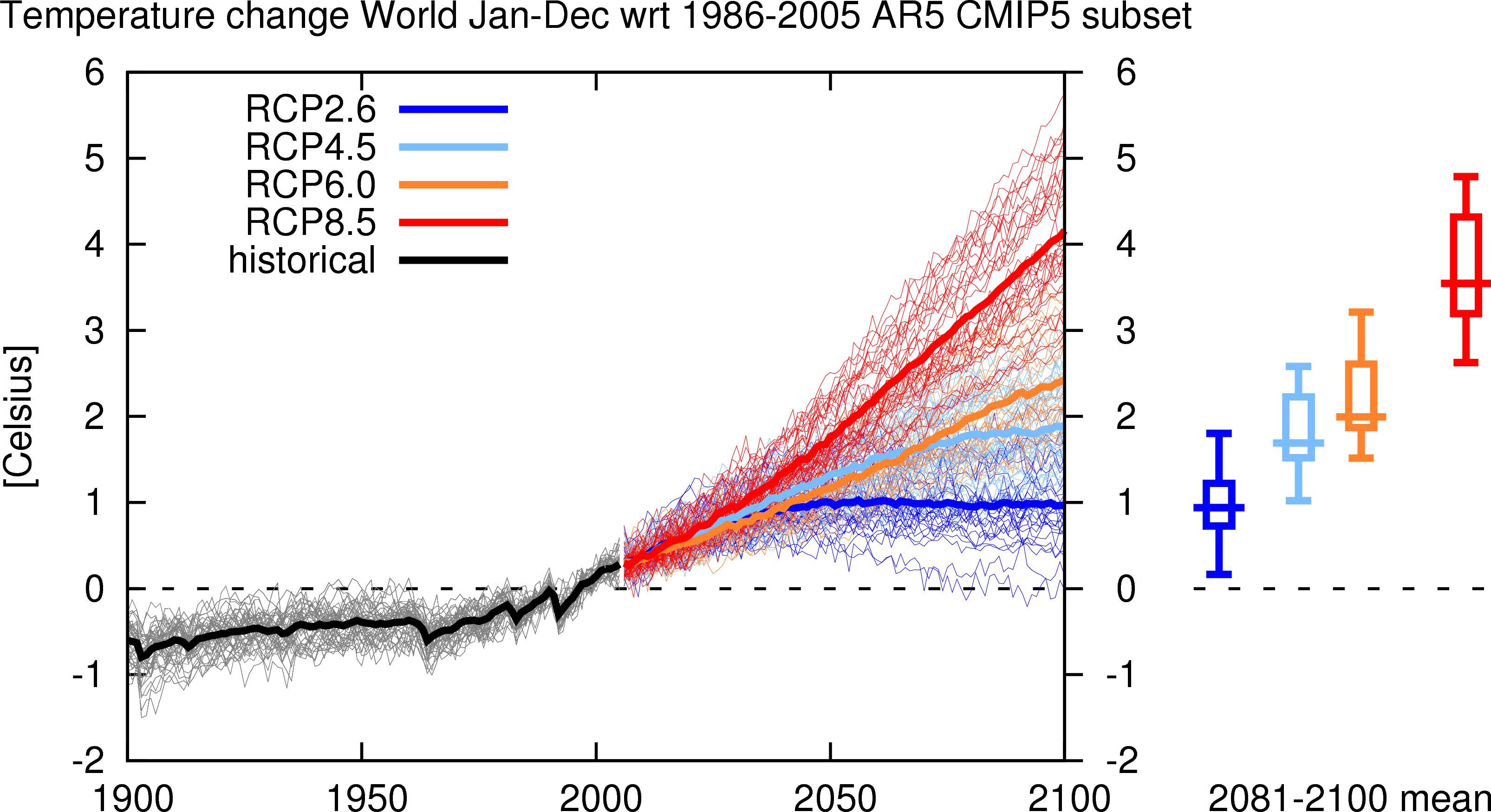 If doing a reading of this graph, we see that the scenarios diverge from 2030. The window for action to combat climate change is therefore greatly reduced. If we are not reducing our emissions dramatically in the coming years, we cannot go back. It is therefore a real race against the clock that humanity faces today.

Here are the temperature and precipitation changes our world will be facing two extreme scenarios:

There is also that in the worst case scenario (RCP 8.5) we have an increase in global temperature of + 4 ° C, resulting in local increases up to + 9 ° C approximately. This is totally unsustainable for the societies in which we live and it would also have enormous consequences on populations and ecosystems.

In the best of scenarios (RCP 2.6), the increase in global temperature is limited which also enables to limit the local increase in temperature. This is a much more comfortable scenario for our societies current but not easily achievable without significant efforts of us all.

We can also see the effect of climate change on rainfall. In the RCP 8.5 scenario, there is only very little precipitation and therefore regions, already very dry world will become even more. This will therefore have consequences that populations can no longer inhabit these regions and therefore the number of climate refugees explodes. The wetlands as they receive benefits of precipitation and are thus exposed to benefits of flood risk and everything what one knows. In all cases, significant changes are to be expected, changes which companies will have to adapt quickly.

Climate change is also a significant increase in extreme weather events (article short and interesting here): longer heat waves, extreme rainfall, more large number of cyclones etc. That is why it takes significant adaptation of societies to climate change to reduce their vulnerability.

Overall there are two main pillars of fight against climate change:

Finally on the presentation of climate change, he must also be careful to distinguish between climate variability from human-induced climate change. Indeed, it is not because we have a winter cold that climate change is no longer there. Let’s watch the time scale associated with the various phenomena and the trend that can be disconnected. We are not expanding, but we will discuss this point in a future interview!

Now that you know more about climate change, visit the sites of production of renewable energy with us! To learn more on renewable energies, paragliding or travel :) And of course join us on networks: 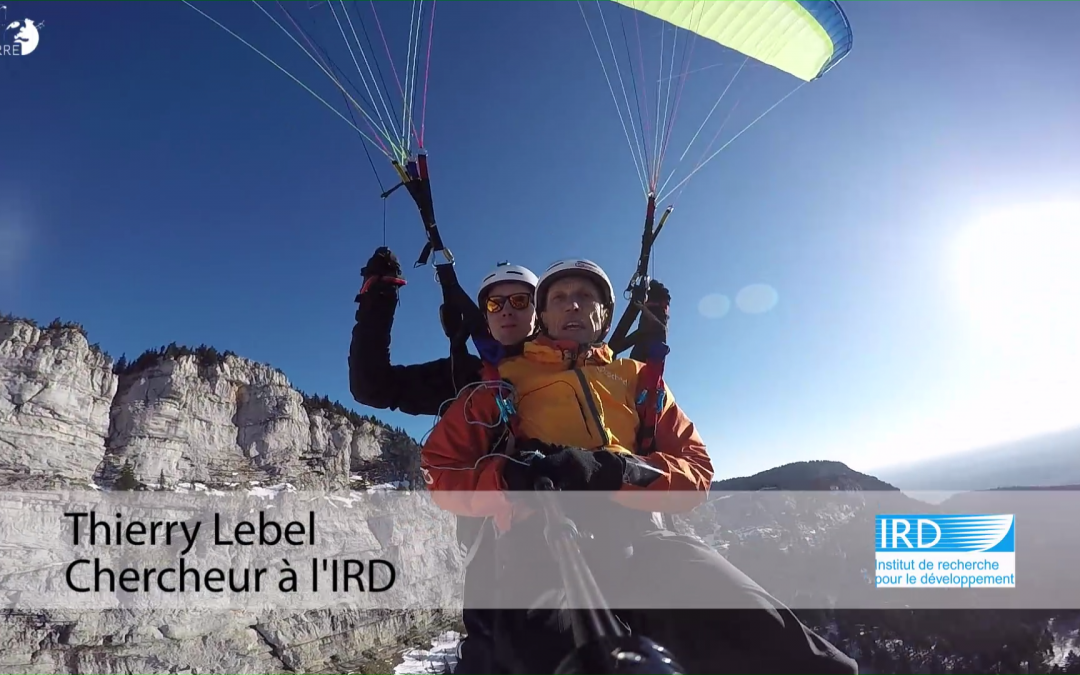 Effect of climate change in the mountains on the water cycle

Today, Thierry Lebel presents the effects of climate change in the mountains on the water cycle with a beautiful flight over the snowy Vercors!
Do not hesitate to come liker page Facebook’s in the Air for the Earth and share the video: www.facebook.com/enlairpourlaterre

And of course, come and visit our website for more information on the project, climate change and energy renewable www.enlairpourlaterre.fr

Thanks to our partners: design Kortel, Sky Dreams paragliding – Gradient France and Gradient.cx

And soon for new videos in the Air to the Earth! 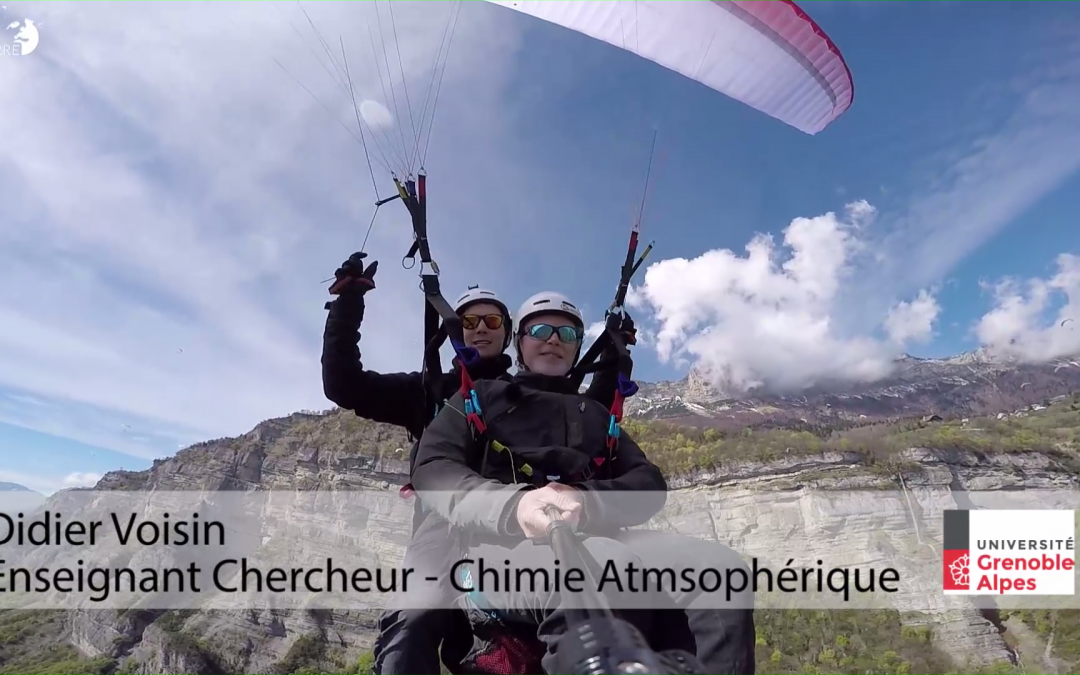 The second interview in the Air to the Earth is online!

We talk about you this time of the link between atmospheric chemistry, climate change and human health.

To do this, we are accompanied by Didier neighbor, teacher, researcher at the University Grenoble Alpes and at the laboratory of glaciology and Geophysics of the environment in Grenoble.

It presents what is atmospheric chemistry, the role of ozone on our planet, how it is created and its link with global warming and human health.

All this in flight course and still very simple!

Feel free to share the video and let us all your remarks and suggestions.

If you want to participate in the project or then contact us for any request, we will be very happy to discuss with you, so send us a message!

Thanks to our partners for hardware: Kortel Design, Sky Dreams and Gradient

Cheers for new videos in the Air to the Earth!

The second interview of the Fly for the Earth project is now online!

For this one, we talk about the link between atmospheric chemistry, global warming and human health.

For this, we are with Didier neighbor, research professor at the University Grenoble Alpes and at the Laboratory of Glaciology and Geophysics of the Environment in Grenoble.

He shows us what is atmospheric chemistry, the role of ozone on our planet, how it is created and its link to global warming and human health.

All of this during a beautiful flight and always in a very simple way!

Feel free to share the video and give us your comments and suggestions.

If you want to participate in the project or everything else contact us, we will be very happy to discuss with you, so send us a message!

Thank you to our partners for the equipment: Kortel Design, Sky Dreams and Gradient

See you soon for new videos of Fly for the Earth!