The Nærøyfjord seen from above 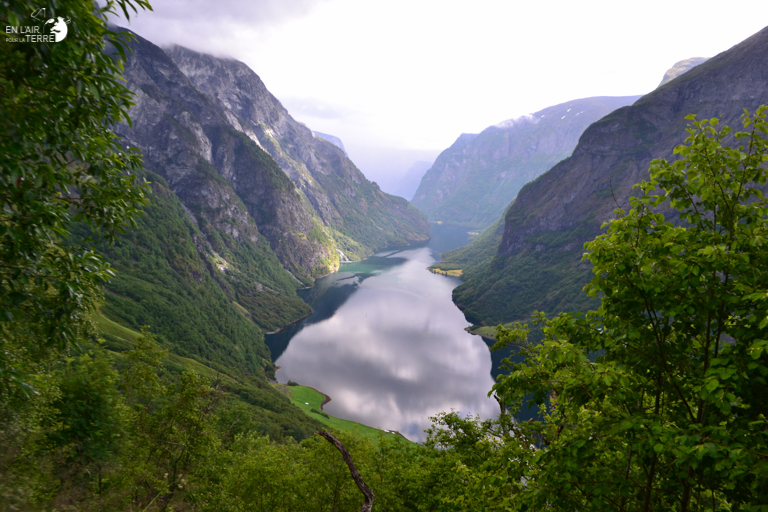 The Nærøyfjord is an arm of the Sognefjord. It is world heritage of Unesco then you couldn’t miss without stopping. The problem is that it’s not nice and so it is not clear the mountains and water of turquoise fjord. Tampis, it’s not the rain that’s gonna stop us then we put our walking shoes and our mini-monsoon and go for hiking Rimstigen. The departure of the hike is a little hard to find because it is not indicated, but as it is clever it locates cars parked along the road and thanks to Google maps it starts to climb following a small path between the tall grass. Thus, there is fast the height on the fjord which is a good way to admire it. Once at the top of the mountain a panel tells us that there is 725 m in altitude. There is a little fog but life is beautiful on this small fjord. As the rain continues one goes quickly because the stones glide more and because it is soaked. 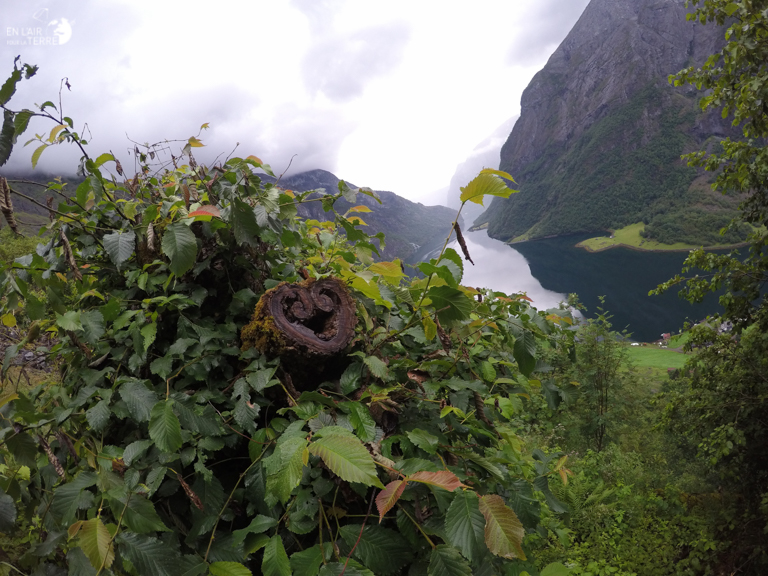 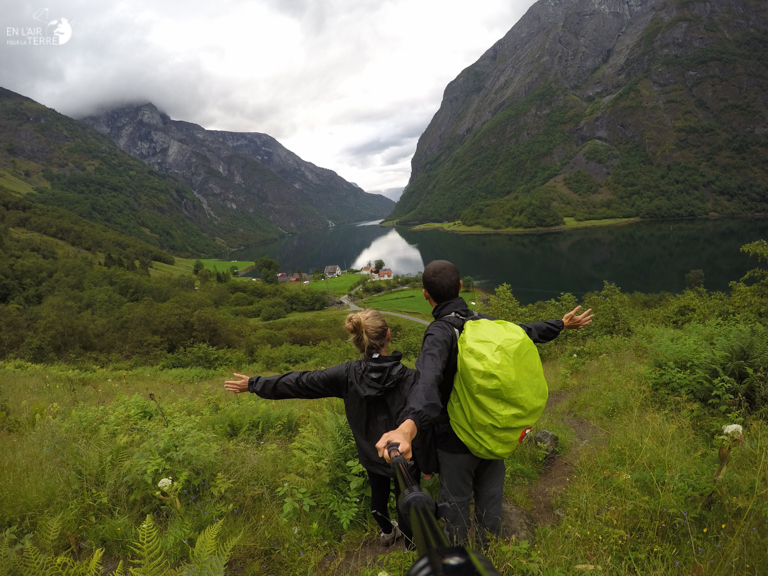 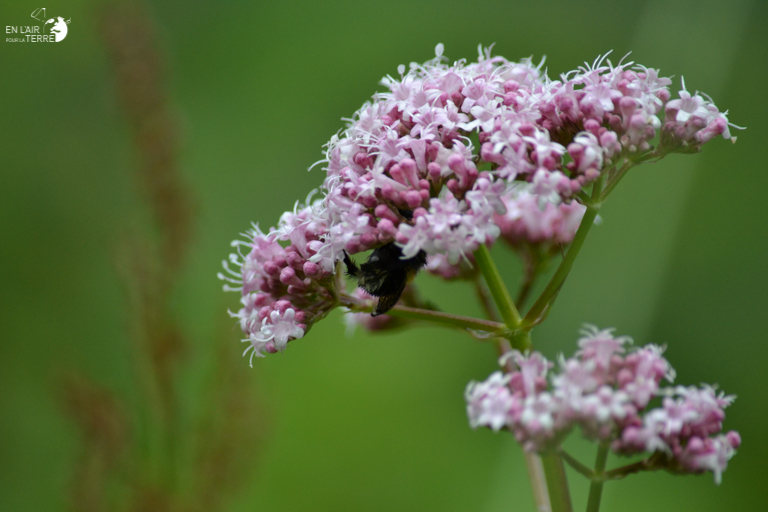 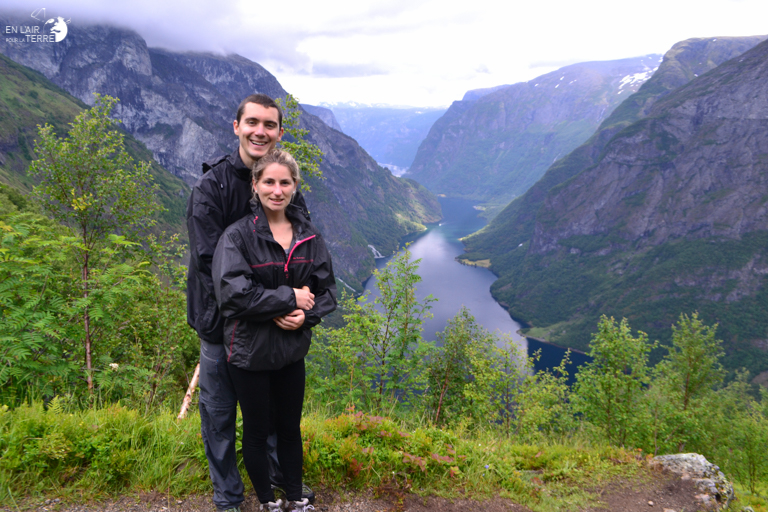 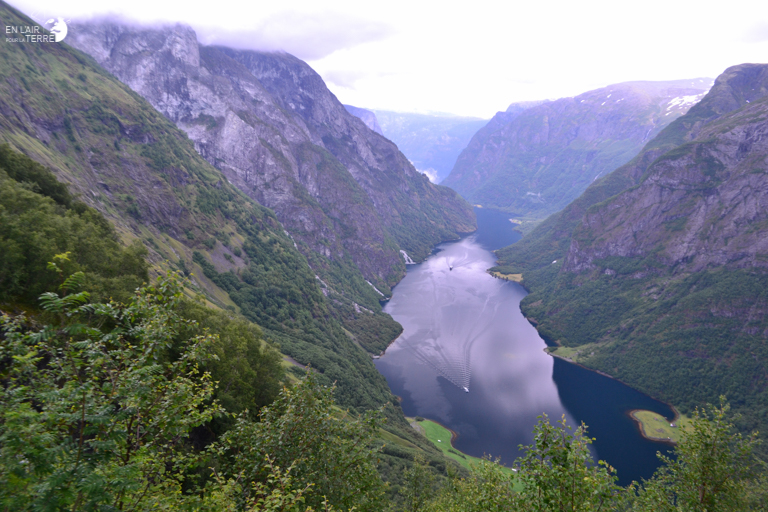 “After the beautiful Sun time (Navy)” or rather after the rain the beautiful time, so it’s an opportunity to make a small flight over fjord since there is a small spot of paragliding not bad after a paraglider of Voss. At Aurland we see gliders who fold their veils, they tell us they will redo a flight and it would be nice to make one with them. We therefore ask the car landing and made the stop. Kurt, a Norwegian takes US in his car. It is really nice. We begin to discuss it in french because he speaks very good french. He explains that he goes fishing to fish trout in the ice. These «small trout» according to him are still 30 cm and it catches a 30 in 2 h which is just crazy for us but normal for him. He also explains his technique of fishing in Nicolas then tells us also have already caught sharks in the fjord (because it is sea water). On the road it stops that we take pictures like other tourists with Nicolas. Here we say that it is a trap and that it will stand with paragliding equipment in his car without us but actually not, he quietly waits for us. It is really incredible. It also tells us that his house is always open and ready us his kayak to go on fjord when one wants. Wow how lucky to have made its acquaintance! Kurt filed us to the parking and then to reach take-off must be installed a little before arriving on a mountain that offers a magnificent view over the fjord. We are with other paragliders. It hurries to equip themselves to take off before the rain. Once in the air a ray of sunlight illuminates the fjord, it is magic. 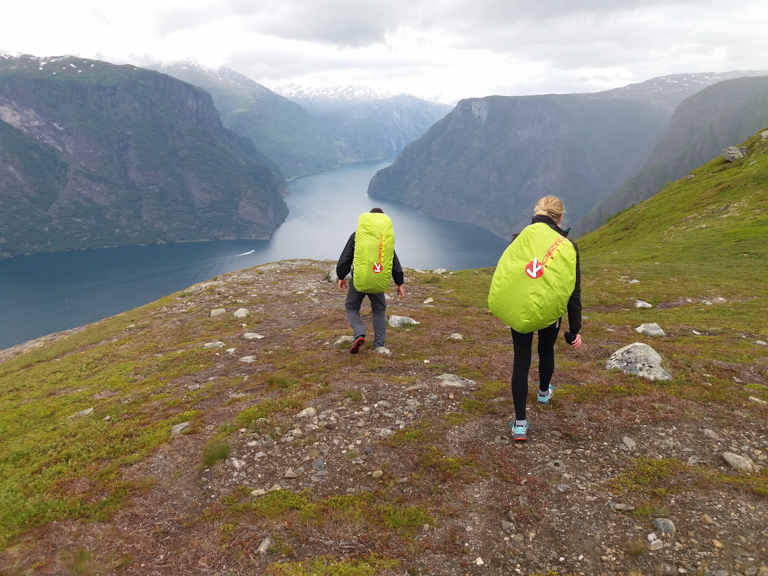 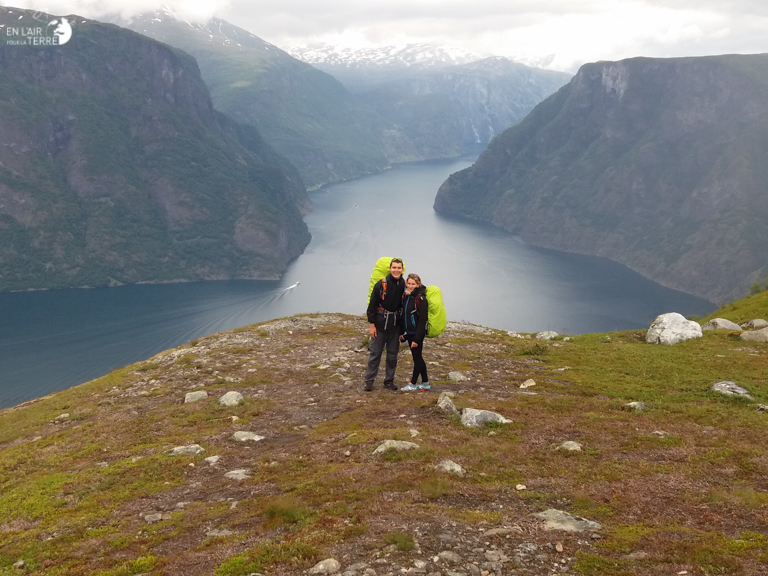 Navy: “the climb with the bag was a little hard because we had already walked in the morning but I was still happy to take off from so high. The Sun on the fjord was amazing just for our flight. Nicolas walks us above the fjord what frightens me a bit because you’d fly above the sea. Before landing, it was the huge wings and then it lands. Other paragliders look at us and say that it is crazy to do the figures with a bi. » 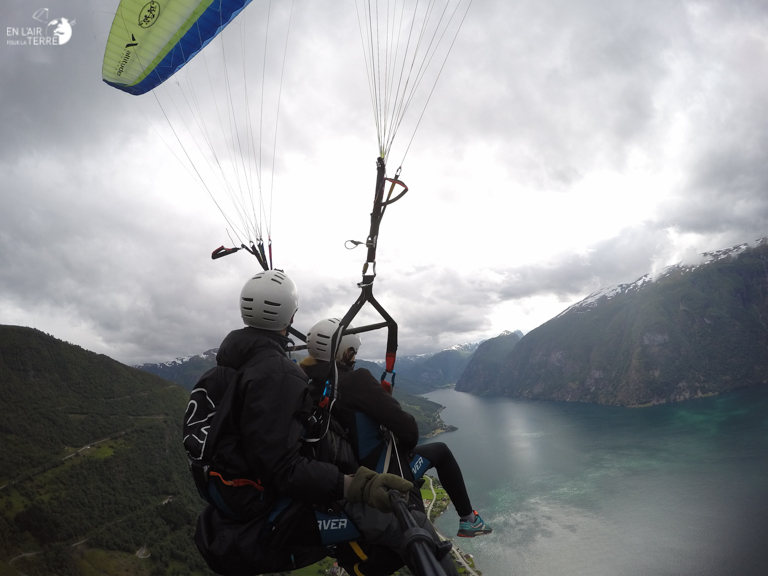 NICOLAS: “after a climb with backpacks on arrived at the point of take-off under a nice downpour but here it is not a problem as the weather changes in a few minutes. We share the take-off with 5 Australian drivers who have already dégourdit the wings in Iceland before coming to Norway. They thought we were going to fly each solo with our small compact bags. Indeed, I wear bi Golden 3and my headphones in the Kortel Hummingbird bag and Marine two Karver 2 harnesses in the II of Kortel bag. This allows us to really be at the top for the market and flight. Once the last few drops past it spreads out sailing and go to take advantage of the Sun’s rays onto the beautiful fjord. It lets one of the Australian 11 sqm which tells us “I will show you the way” and that after two three turns engaged takes a nice closure. It really is a huge chance to fly over this beautiful Fiord and all the waterfalls that surround it. We enjoy the flight ending in beauty by 4-5 wings engaged history of even the fjord under our head. Asked on the official airstrip next to the fjord. We took the opportunity to exchange with the Australian pilots on the good plans to fly in Australia or other countries where they went. t we get the car met the flight.” 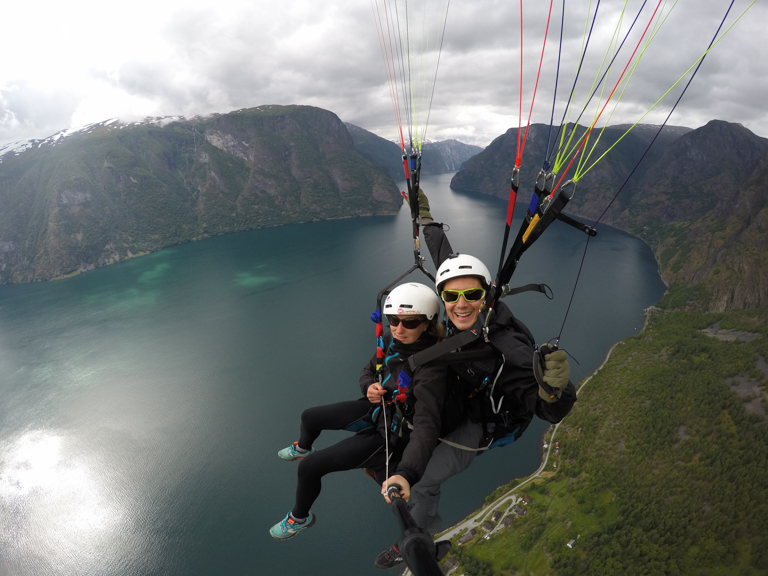 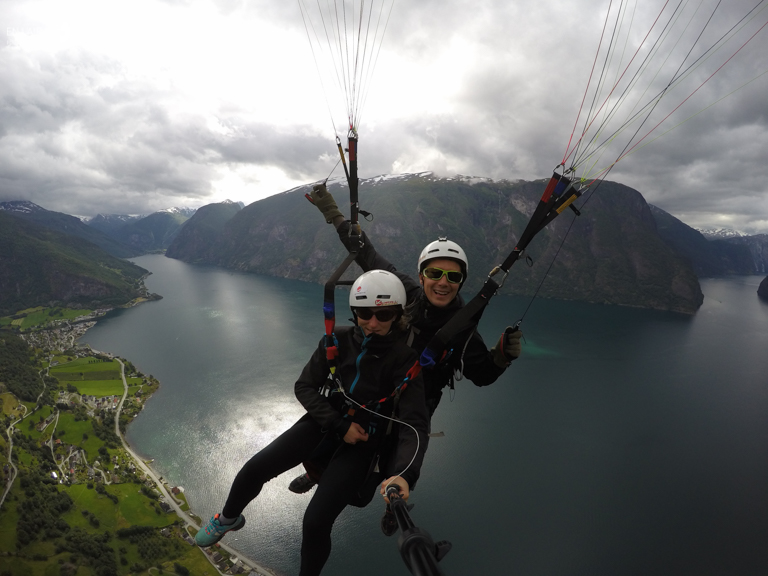