Hike and fly to the Lysbotenfjord 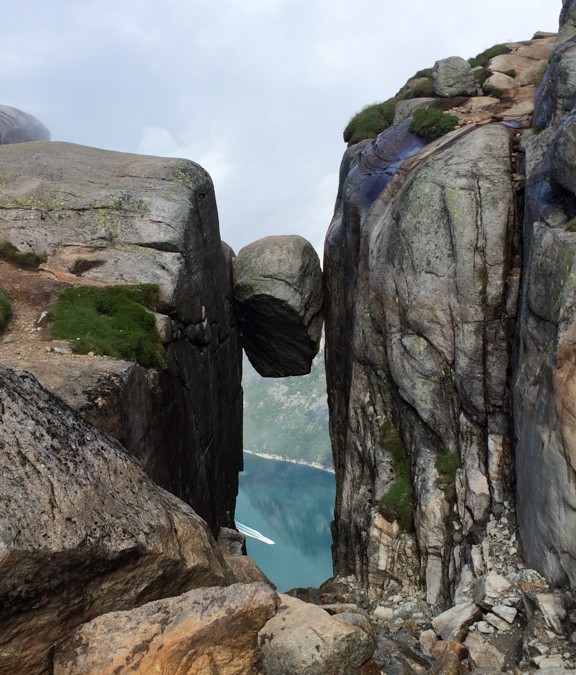 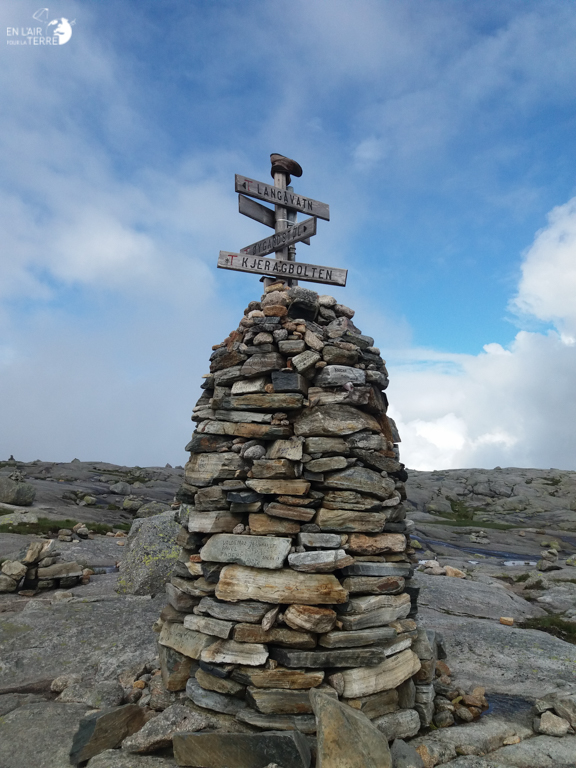 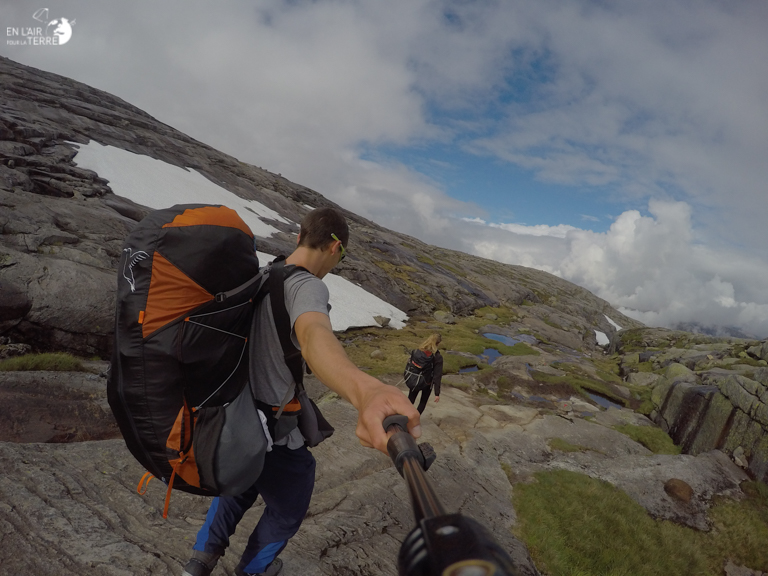 This matte big fat morning until 6:30 take a breakfast rapido and will park at the parking. There Nicolas fills on the spot of paragliding at the top of the hike. Storing too nice tells us that there are shuttles from basejumpers and wingsuit often hyped and that they can show us the deco. At this time the shuttle in question stops, asked the guy to ride with them, and he tells us that he has no worries. On short search our bag and for pay parking and store says “Oh don’t worry for the parking. Too cool 15 euros saved! The shuttle filed us 200 m above another departure of the hike. The driver tells us to follow the 1 guy front, but it sows from the first climb in the stones. They are fast these baseux. Good we’ll have to fend alone. The rise is a bit hard because it’s the first big hike of the trip but what reassures us is believed to start per thousand meter in altitude but in fact it has only 500 metres. Are mounted between the small lakes, there is still snow by location is super beautiful and increasingly there is not many people at the moment, is too cool. 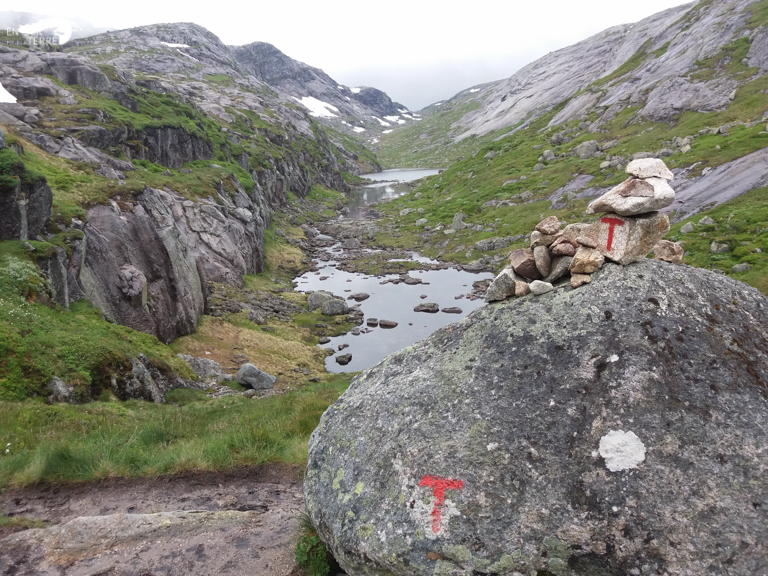 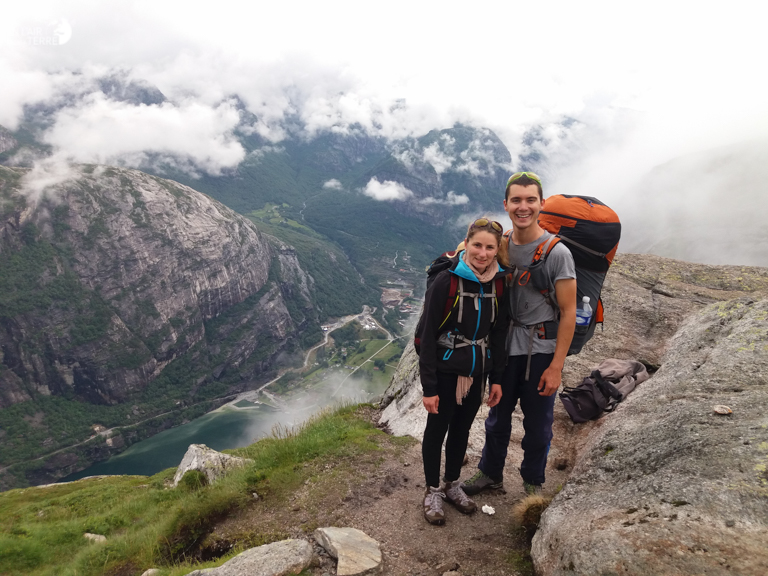 Once at the top, it must go down a little and walk on the ice to reach the Kjeragbolten, the famous Pebble stuck between two cliffs and overlooking the Lysebotenfjord. It’s a bit ouf walking on the snow in summer and even more crazy to say that one is in a sort of crevice between two blocks of cliff. The arrival is spectacular because just in front of us, there are Pebble. It is too lucky because the small mist that hid a little fjord rises and we can see the turquoise blue of the fjord. Wow, there’s even a rainbow! 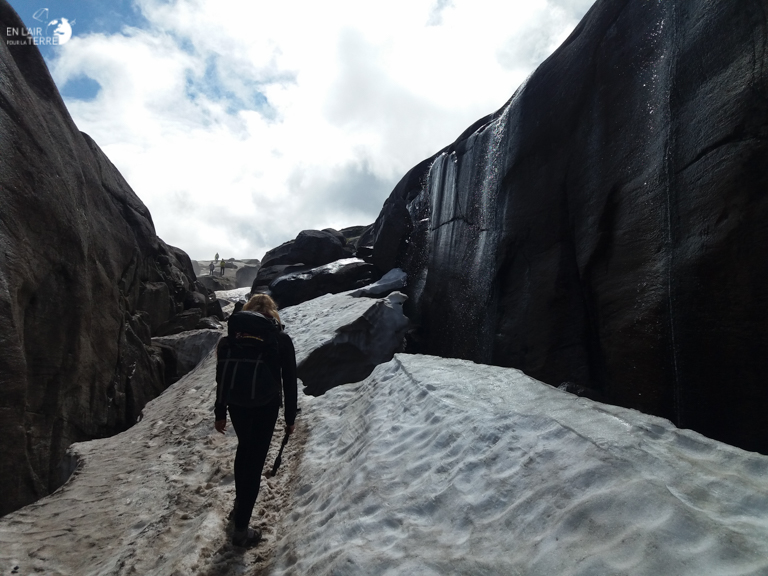 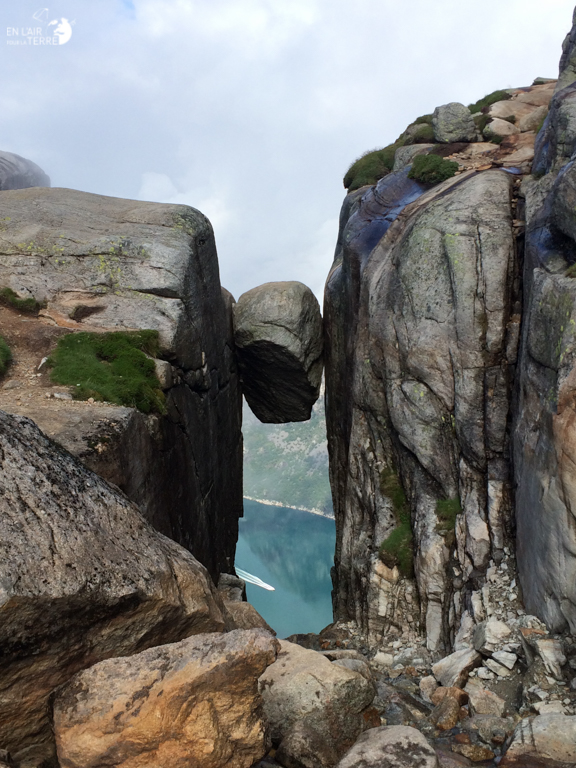 People, (a bit crazy) are going to walk on this rock to take a photo. I’m too afraid but Nicolas goes there. 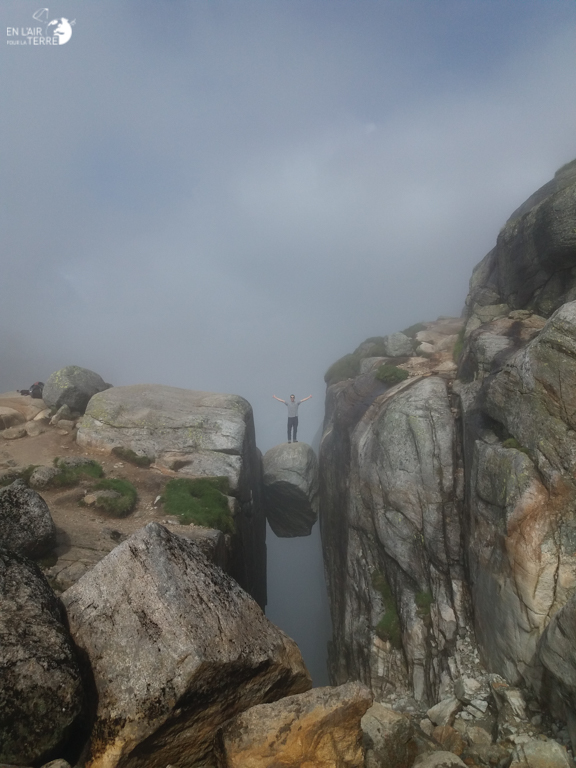 Then it hurries back to unfold our sailing as the mist that rises is actually, in the language of paraglider thermal dating. This is the time to prepare for take-off. Just the time to equip themselves and time changes. So fill our material and we go back down a little. Time returns to the beautiful, it redeplit then our sailing below and get started! 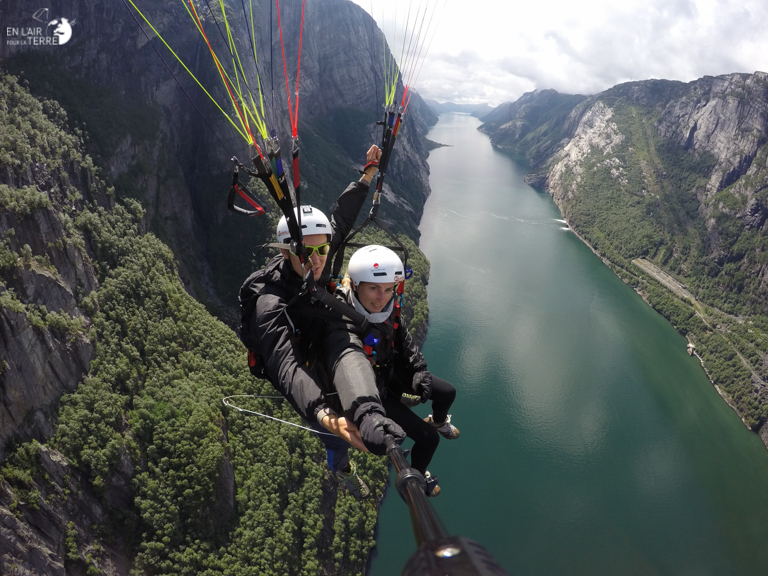 Navy: “there is also a small audience who is there to watch us take off. ” Many do not know paragliding and are really happy to witness this moment. The flight is incredible! 1000 meters of gas it is very impressive! The fjord under our feet is a bright blue and we can see the reflection of the tandem in the water. It is really crazy to say that we can see the fjord in this way. It seems everything in between these huge cliffs. From up there is also seen fish jump to the surface to eat. Missed us more than a small fishing rod and could catch the evening meal. Also I want too much Nicolas departs from landing because if ever the wind more pushes us, I fear of falling in the water and that looks really very cold. It passes waterfalls and it’s already time to land. But as there is no official landing, we will ask the air of nothing in a campsite. Nicolas made warm above tents and guys down a bit, flippent lest one breaks everything. Once all the relieved applauded camping ashore. » NICOLAS: “we deplit the tandem for the second time in the day after having unraveled two three knots in the lines (ok a quarantine) and the when even a two-seater glider that is large enough to unfold mainly on a small unofficial above the fjord takeoff but good was a good breeze front, it lifts the veil and it is left for the flight including both dreamed.» And the magnificent views of the fjord, the cliffs that surround it and stunning waterfalls. The flight is so beautiful that there is no figure for not to lose one meter of altitude and enjoy to the maximum. A salmon we Hi and say that to the nardiablack with a drizzle of olive oil it would as a letter in the post unfortunately Marine who has well enough the gopro and the camera could not take the cane fishing. As usual for these flights landing is chosen in flight after takeoff and anyway once it took off it must be landing somewhere. It is therefore with joy and good humour that be invited to drink on the green grass of the camping of Lysboten. It is the first time that one has a place as nice to fold the sail. Folding and hop it will look for a shuttle. » 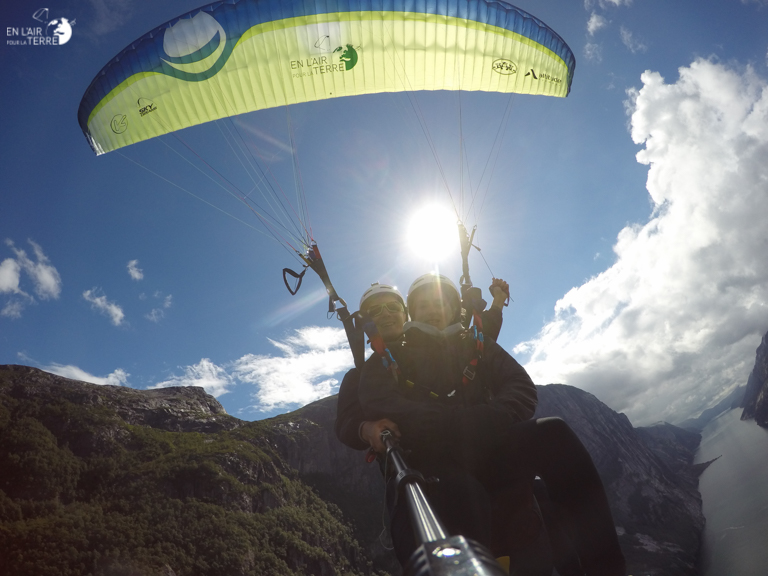 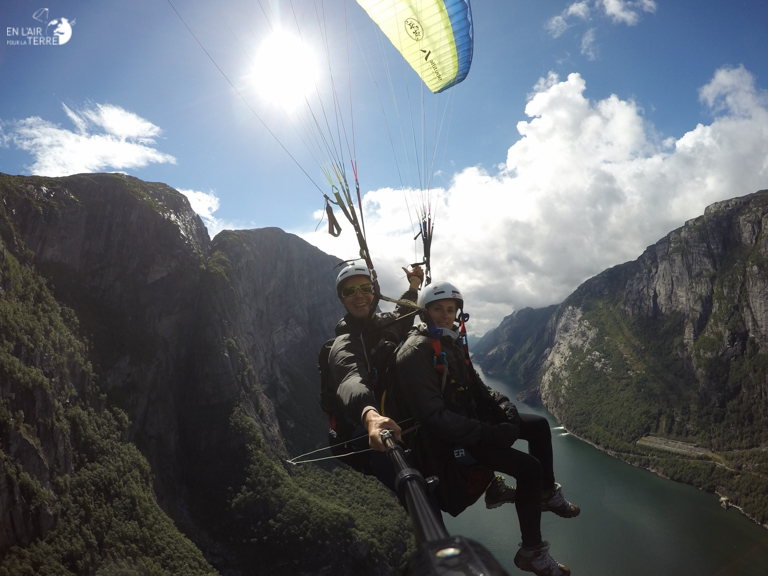 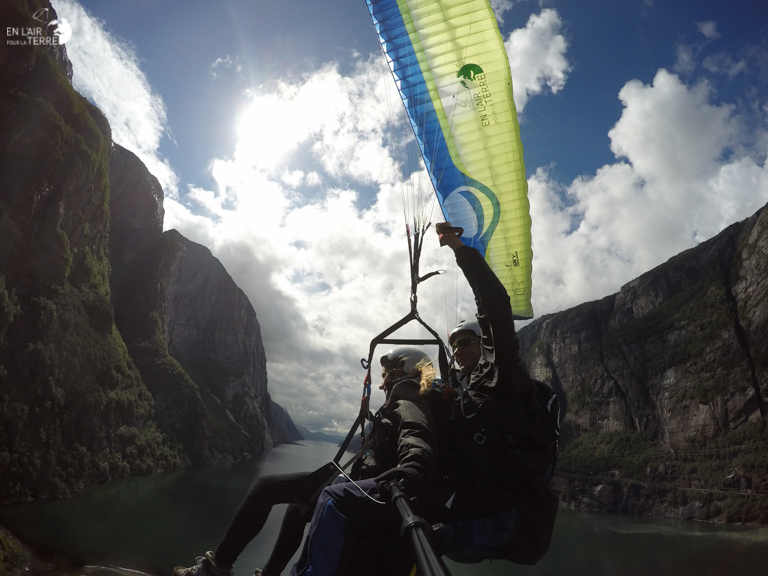 This too awesome flight performed, is told that it is now part galley, which will start because one must go back stop vans or cars that come here are full. Second stroke of luck of the day, he spends a private shuttle 16 places that offers us back for free. Go hop on monte. On the way the guy is very talkative and happy to discuss with Nicolas while me I do a little dodo. This day really exhausted me, but it is far from over. 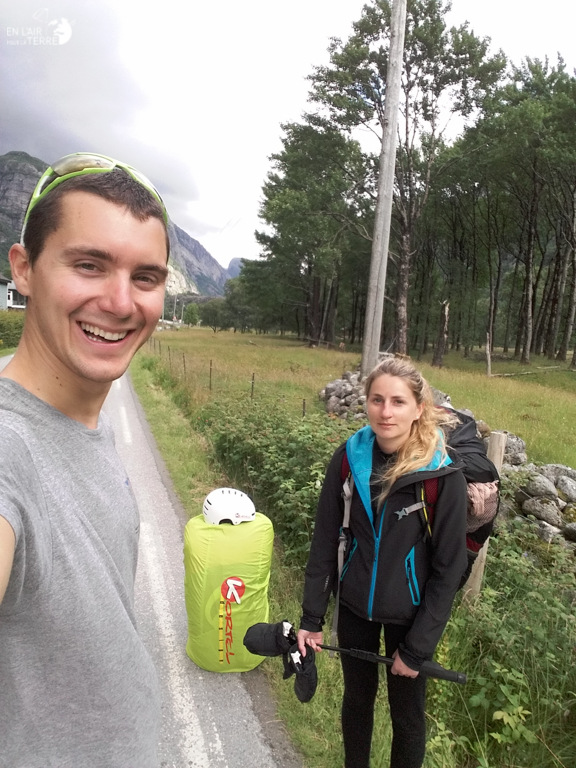 Back in the parking lot, is expected to pay because store it has changed, but not yet a good surprise it let us go quietly. It n said that there really wants much luck today. After ate, at the time of doing the dishes one closes the trunk of the car and surprise, key remained indoors and there a self-closing. It is the drama because the double key is also in my jacket, which remained in the car! They say while it takes breaking a window but it’ll be very annoying for the rest of the trip… Fortunately our neighbour camper has tools. I managed to drag my hand out the window ajar and I open the door. Hathaway will make a good dodo.